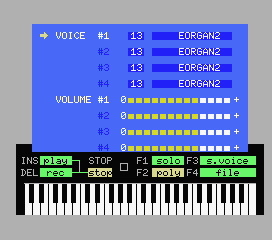 I’ve been out of the Windows system for a while but remember the BlueMSX emulator. For me that was the best functioning MSX emulator around and I bet it still is.

I donated a CX5M-I to Daniel Vik at that time, asking him if he would be willing to make special effort on emulating the CX5M specifics in return.

Well about a month later I was able to testrun the CX5M software on my PC. Great work! So if you want to test out some ROMs and have a PC – you can try and load them into the BlueMSX emulator